Story by Andrea Shaw, Nola.com for the Times Picayune. 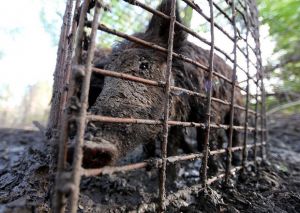 “They are environmental vacuums,’” said Dwight LeBlanc of the U.S. Department of Agriculture’s wildlife nuisance program. “A lot of conservation groups consider them the No. 1 invasive species in terms of detriment.”

Across Louisiana, human beings aren’t the only ones who live to eat. Feral hogs are proving to be stiff competition, as they snack on sugar cane in Lafourche and St. Mary parishes and devour the rice fields of Acadia Parish.

But the wild pigs’ palate could also pose trouble for the New Orleans region’s efforts to protect itself against storm surge. The swine have taken to uprooting levees, requiring thousands of dollars in repairs that the pigs quickly destroy again, and to dining on what’s left of the state’s rapidly disappearing marshland.

Without help from the U.S. Department of Agriculture, said Guiseppe Miserendino, regional director of the Southeast Louisiana Flood Protection Authority-West, “We can’t keep up with them.”

Feral pigs are far more destructive than nutria and armadillos and constitute a threat to human beings, agriculture and the environment. They are everywhere, grazing on golf courses, sauntering onto airport runways and crashing into cars.

At least 38 states are wrestling with wild boars that are responsible for $1.5 billion in damage annually, according to the U.S. Department of Agriculture. Their population is estimated at more than 5 million.

The Southeast Louisiana Flood Protection Authority-West enlisted the USDA to assess its feral swine problem after the hogs started rooting the levees along Lake Cataouatche, Bayou Segnette and Jean Lafitte National Park. In 2012, Hurricane Isaac’s deluge pushed the porkers from their native habitat in the swamp to higher ground, where they found a dry, easier buffet for the taking.

The evidence was discovered during a routine assessment of the levee system after the storm passed, Miserendino said. Inspectors initially considered the damage to be a minor issue, but immediate repairs to the earthen barrier were undone by the pigs 24 hours later -- placing the levees in worse shape than the day before. The cost was a couple of thousand dollars.

“You just put that money in the drain,” Miserendino said. “If we can’t get it under control, it could wreck the levee board’s OM (operations and maintenance) budget and impact funds set aside for future levee lifts. In Louisiana, in New Orleans, we live and die by our levees.”

Said Paul Dauphin, a West Bank levee board member: “At this point, it might be described as an expensive nuisance, and if it’s not nipped in the bud, it can become a more expensive safety issue.”

The West Bank levee authority is not alone. Its east bank counterpart has seen similar damage, and Bayou Sauvage Wildlife Refuge has suffered hundreds of thousands of dollars in damage to the levees designed to protect eastern New Orleans. The Naval Air Station-Joint Reserve Base in Belle Chasse has a hunting program to keep nuisance wildlife in check.

Still others call on private trappers or hunters to thwart the animals, which can destroy a football field’s worth of landscaping or sugar cane in the time that it takes to watch a Sunday afternoon of football games.

“You’re riding by a sugar field that seems normal, and in the middle of the field, these feral hogs have been eating the crop,” he said. “When you come through the field with the harvester and there’s nothing there, it can be quite alarming.”

LeBlanc said wild hogs tore through three lawns overnight in Lafayette, devouring $30,000 in landscaping. “They can turn over a lot of ground in a short period of time, and it doesn’t take a lot of them do it,’’ he said. 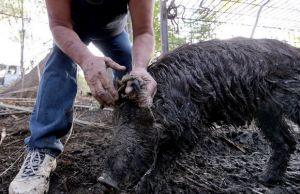 Trapper John Schmidt, a 35-year veteran in the nuisance wildlife business, said he doesn’t think the local feral swine population is large, but it is growing. Since Hurricane Katrina, he estimates he has snared 3,000 pigs around the region – more than one a day over eight years.

“What it takes is a bunch of traps and a bunch of hard work,” he said.

Schmidt said when he checks his traps in Algiers, he’s certain to have tenants. Occasionally, however, a mature hog too smart to be taken in by his corn and molasses bait will escape capture. He also deploys cameras.

He said he has seen the levee damage caused by wild hogs on the hunt for arrowroot, grubs and worms. “They started rooting through the clay after the rain,” Schmidt said. “They will destroy hundreds of linear feet of levee overnight that it takes months and months to fix.”

Brought to the United States by English settlers, feral swine are highly prolific. They spread across the country because of their high reproductive rate, their dispersal by natural events such as hurricanes and their release by people onto private property for hunting, LeBlanc said.

“People are substituting pigs for deer. It’s easier to kill pigs,” LeBlanc said. “Then you have natural events when you get a tremendous volume of water that will displace pigs. We saw that quite a bit after Hurricane Rita in Cameron and Vermilion parishes.”

Each year, feral hogs are capable of producing two litters of a dozen pigs. They thrive in swampy land and can weigh up to 400 pounds, will eat everything from roots to alligator eggs. Alligator farmers lose $200,000 to $300,000 in eggs each year to wild hogs, LeBlanc said.

The animals have no natural predators and no fear, and they are violently protective of their young.

Their numbers were so great at Chico State Park near Ville Platte that they availed themselves of the park’s amenities, LeBlanc said. “The pigs were coming out and walking across the splash pad where kids were playing under the fountains in the water park,’’ he said.

Their intelligence can be frustrating for farmers and those who try to manage their populations. Waguespack recalled how discerning swine cherry-picked a test field of high-sucrose sugar cane in the mid-1990s, disrupting the collection of data.

“We’d have it in three different spots in the field. They would have no damage except this one variety,’’ Waguespack said. The pigs “would totally demolish it. It was like they were reading the variety stakes.’’

So nettlesome have they become that in 2011 the Legislature made it easier for hunters to trap and shoot feral pigs and allowed the use of guns with silencers to shoot nuisance wildlife.

The most common approach to managing feral hogs is trapping and hunting. Earlier this year, the Navy ramped up its hunting program at the Belle Chasse air station, with trained and licensed hunters killing the hogs. Some use buckshot, some a bow and arrow.

In addition, service members who work or live at the air station are occasionally allowed to hunt for sport when the season is appropriate, said Petty Officer 1st Class Geoff Brown, who volunteers for additional duty as a game warden. Since June, Brown said, about 50 hogs have been “harvested,” including the 35 trapped in wooded areas.

While some service members keep their kills for food, the Navy donates other hogs to a local substance abuse center for their menus.

Technology plays a key role in helping USDA agents locate animals for management and testing for diseases such as including brucellosis and leptospirosis, which can affect people. Night vision devices and thermal technology are effective in finding pigs at night for eradication. Radio collars are placed on so-called “Judas” pigs, who are tracked to where they betray groups of feral swine. Traps are becoming more sophisticated as wildlife nuisance specialists receive text messages and images sent to their phones when hogs are penned.

While the jury is still out on some of the technology, LeBlanc said, other passive approaches -- such as barriers in the form of fences or concrete mats on the levees and insecticides to disrupt the pigs’ food sources -- also are options.

“There is no panacea for feral swine work,” he said, adding the object is not to eliminate the hogs. “If you apply the right amount of pressure, you reduce the damage.”

The original story this is based on appeared here.