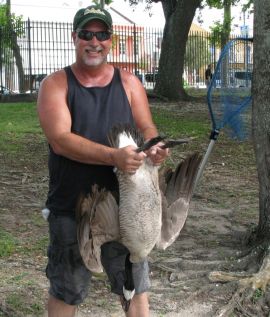 Two animal rescue teams spent the majority of May 31 and June 1 in New Orleans, attempting to capture a Canada Goose, whose webbed feet and legs were tangled in fine, strong line, often used to catch turtles and other aquatic wildlife.

After the two-day struggle, the goose was finally freed of the tangled line and returned to the pond in Armstrong Park in New Orleans, said Jeff Dorson, director of the Humane Society of Louisiana.

Animal rescue personnel cut a nylon line that had tangled around a Canada Goose's webbed feet and legs in a pond in Armstrong Park in New Orleans.

Because the nylon line had twisted and wrapped her legs together, the goose could barely walk or stand, Dorson said. Katrina Perkowska, director of Kasia's Ark Bird Rescue, which often works with the Humane Society of Louisiana, and her small team of volunteers tried unsuccessfully to capture the goose May 31. Despite its handicaps, the goose was still able to fly and evaded her would-be captors, whenever they approached her.

To help with the rescue efforts, the humane society contacted John Schmidt, a licensed animal handler, known as Trapper John, who has appeared on many national TV shows.

Schmidt and his assistant, another licensed animal rescuer (Trapper Suzy), tried for several hours to capture the Canada Goose on May 31, but to no avail.

The same team, fortified with a few more volunteers and a park ranger, met again on June 1, and developed and implemented a new plan. They decided to chase the bird in a pirogue, wear the bird down and then corner her with the help of their team members. After several hours of chasing the bird, the plan finally worked. Exhausted after being chased for several hours, the goose finally walked to the grassy area beside the pond and laid down.

The team then moved in and surrounded the bird, Dorson said. As she was attempting to fly away, Schmidt caught her in a big fishing net and carefully lowered her to the ground. Team members then held the goose while other members cut the fine line that bounded her legs together. An examination showed that the line had luckily not cut into her legs and had not cut off the circulation, Dorson said..

﻿Team leaders determined that the goose did not need medical attention, so they massaged her legs and released back into the pond, where her mate and gosling were awaiting her return.

The bird was later seen walking on both legs and appeared to be healthy, strong and alert, Dorson said.

Schmidt, who has vast knowledge of indigenous and non-native wildlife and an animal rescuer for more than 25 years, said the bird was a Canada Goose.

“This is not a migratory bird,” Schmidt said. “It is a Canada Goose which was introduced in the 1980s, under a plan administered by the US Fish And Wildlife Services, in a joint state and federally funded program, in order to increase this specific bird population which was in decline at the time. Members of this species were introduced in Louisiana and Mississippi, and this bird is a direct descendant of this program.”

This is not the first time Trapper John has worked with the Humane Society helping waterfowl; see the story from 2007 on Daffy the duck.

The original story this is based on appeared here.