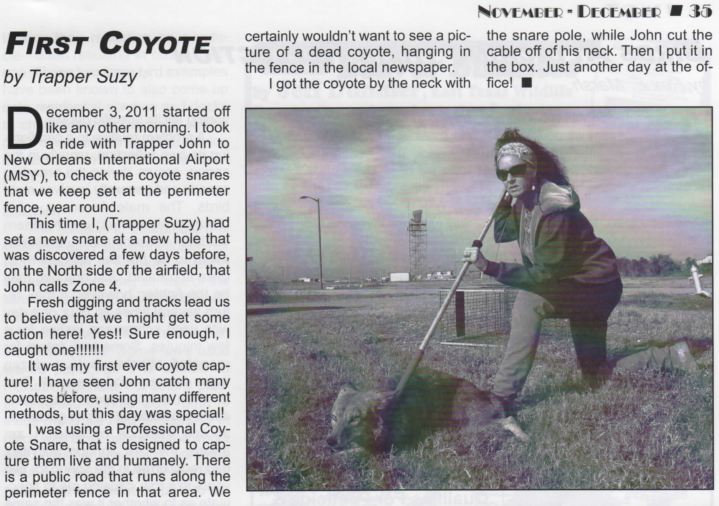 Trapper Suzy wrote about her first coyote snaring and shared it in the November/December issue of Wildlife Control Technology Magazine.

December 3, 2011 started off like any other morning. I took a ride with Trapper John to New Orleans International Airport (MSY), to check the coyote snares that we keep set at the perimeter fence, year round.

This time I (Trapper Suzy) had set a new snare at a new hole that was discovered a few days before, on the North side of the airfield, that John calls Zone 4.

Fresh digging and tracks lead us to believe that we might get some action here! Yes!! Sure enough, I caught one!!!!!!

It was my first ever coyote capture! I have seen John catch many coyotes before, using many different methods, but this day was special!

I was using a Professional Coyote Snare, that is designed to capture them live and humanely. There is a public road that runs along the perimeter fence in that area. We certainly wouldn't want to see a picture of a dead coyote, hanging in the fence in the local newspaper.

I got the coyote by the neck with the snare pole, while John cut the cable off of his neck. Then I put it in the box. Just another day in the office!